100 black-and-white photos shot by Gary Monroe from 1980 to 1998 in Haiti, in Haitian neighborhoods in Florida, and in Krome Camp, Florida, where Haitian refugees are detained by the U.S. government. END_OF_DOCUMENT_TOKEN_TO_BE_REPLACED

Gary Monroe photographed extensively in Haiti from 1980 to 1998. This selection of one hundred prints documents life in Haiti and in Haitian communities in Florida, including the I.N.S. Krome Resettlement Camp in Miami where refugees were detained. Monroe made over twenty trips to Haiti. He used local transportation "tap-taps" to get around the island, photographing in Port-Au-Prince, Cap-Haïtien, Lina, Jacmel and many other places, some not found on maps. He captured images of daily life including political rallies, marketplaces, educational facilities, workers, and religious ceremonies. In his home state of Florida, Gary Monroe documented the establishment and growth of Haitian communities in South and Central Florida as well as the living conditions of refugees detained at Krome Camp.

ABSTRACT
Documentary photographer, writer, and lecturer based in Florida. A collection of 100 16x20 black-and-white gelatin silver prints shot by Gary Monroe from 1980 to 1998 in Haiti, in Haitian neighborhoods in Florida, and in Krome Camp, Florida, where Haitian refugees are detained by the U.S. government. Images depict individuals, families, and groups of Haitians and Haitian-Americans in a wide variety of locations, including city streets in Port Au Prince and Miami, rural locales, marketplaces, religious centers, housing interiors, and other locations. Some images of protests and ceremonies are included. Prints are identified by unique number assigned by photographer and arranged by country and then chronologically by number. Acquired as part of the Archive of Documentary Arts. 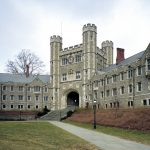 by Cory Lown about 6 years ago

Last week I traveled to lovely Princeton, NJ to attend Blacklight Summit. For the second year in a row a smallish group of developers who use or work on Project Blacklight met to talk about our work and learn from each other. Blacklight is an open source project written in Ruby on Rails that serves … END_OF_DOCUMENT_TOKEN_TO_BE_REPLACED